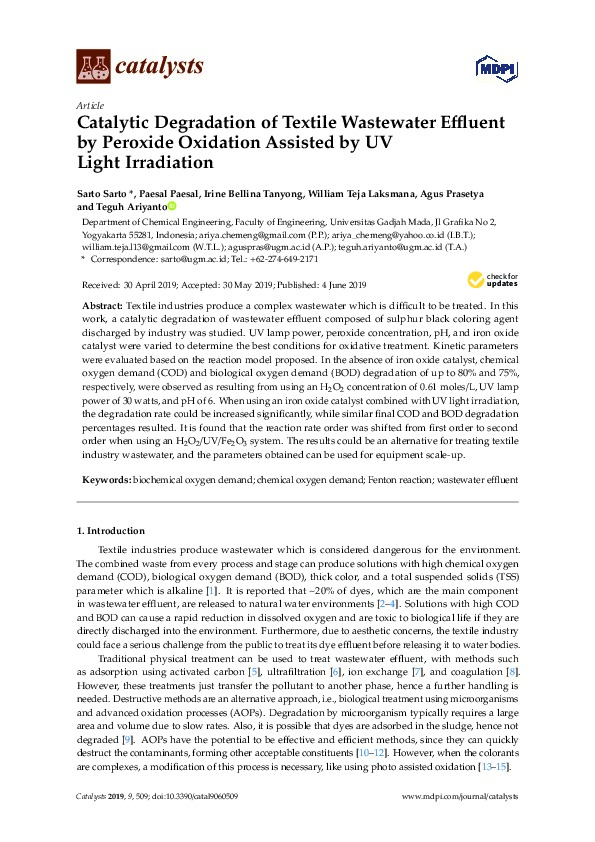 Textile industries produce a complex wastewater which is difficult to be treated. In this work, a catalytic degradation of wastewater effluent composed of sulphur black coloring agent discharged by industry was studied. UV lamp power, peroxide concentration, pH, and iron oxide catalyst were varied to determine the best conditions for oxidative treatment. Kinetic parameters were evaluated based on the reaction model proposed. In the absence of iron oxide catalyst, chemical oxygen demand (COD) and biological oxygen demand (BOD) degradation of up to 80% and 75%, respectively, were observed as resulting from using an H2O2 concentration of 0.61 moles/L, UV lamp power of 30 watts, and pH of 6.

When using an iron oxide catalyst combined with UV light irradiation, the degradation rate could be increased significantly, while similar final COD and BOD degradation percentages resulted. It is found that the reaction rate order was shifted from first order to second order when using an H2O2/UV/Fe2O3 system. The results could be an alternative for treating textile industry wastewater, and the parameters obtained can be used for equipment scale-up.