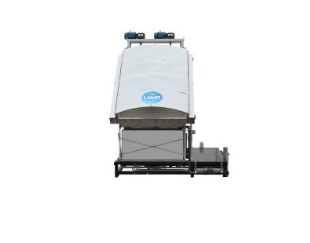 For several years, the Yutzy family sought an efficient way to provide clean flush water for their dairy barns.

They found their answer about 1,900 miles and a nation away from their Shenandoah Valley home.

Windcrest Holsteins is the first dairy in America to install the First Wave system created by Livestock Water Recycling Inc. The system, invented by the Calgary, Alberta, company, separates manure into solids and liquids.

“Between this and our new sand separator, we finally feel like we have a solution,” farm manager Aaron Yutzy said.

The family thought it had a solution more than three years ago when it installed a separator to remove the large fiber from the manure, he said. That system left something to be desired.

“It never did what we wanted it to do,” Yutzy said.

Family members rejoined the hunt, considering multiple options and visiting dairies in other states to check out their solutions. Yutzy said he and his father, Dave Yutzy, saw the LWR System system — which removes enough solids to provide potable water — at two Wisconsin operations.

First Wave, Aaron Yutzy said, proved to be the most economical option.

Including the building that houses the system and stores the manure, Dave Yutzy said the project cost about $500,000. Windcrest will spend between $90,000 and $100,000 a year on polymers used in the process.

No grants were received for the project, he said, and he doesn’t know of any tax credits to offset any of the cost.

Though he preferred a less mechanical solution, because he’s responsible for keeping the system running, Aaron Yutzy said family members didn’t balk at Dave’s decision to go with First Wave.

“We didn’t put up much opposition to Dad,” he said, “because we were all really wanting a solution and kind of willing to try whatever. We were having issues with the drain pipes clogging up because the sand was dense, and the water couldn’t move the sand and manure through the drainage, and the barn was dirty, and it was just kind of like, find a solution.”

The First Wave system arrived at the Timberville dairy early this year. Aaron Yutzy said the family installed it themselves, only having to connect the wires and plumb in the pumps.

The dairy added some automation, installing a system that allows the polymer that adheres to the manure solids to be sucked into the mixing tank. Three times a day, a 50-pound bag is dumped into a bucket and is drawn up into the tank by the vacuum created by the swirling water.

Aaron Yutzy said the dairies he visited had a person manning the LWR System system whenever it was running, but he found a way to avoid that. He installed proximity sensors along the conveyor belts, and they shut the system down if a belt stops running and send an alert email to Aaron Yutzy. If no manure has to be removed, he can restart the system with his smartphone.

First Wave, he said, removes about 98 percent of the solids from the water. That brown water is collected and stored to use to flush the barns. In years when rain is in shorter supply than 2018, it can provide nutrient-rich moisture for application on the family’s fields via their center-pivot irrigation system.

Conveyor belts carry solids to the storage barn and dump them into windrows for later application to fields.

Find Out More About the Technology: Livestock Water Recycling