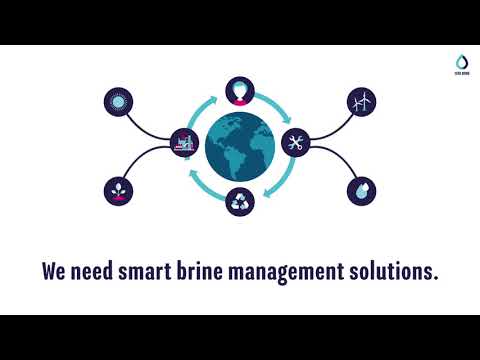 Every year, Polish mines dump nearly 4 million tonnes of salt into rivers and freshwater basins in the form of industrial wastewater.

This salty wastewater (also known as brine) is putting great environmental pressure on Poland’s rivers. The rising salinity of the Vistula River , for example, which provides 60% of the country’s freshwater needs, has resulted in industrial and agricultural losses estimated at $100-250 million annually.

The ZERO BRINE project is seeking to change this by recovering water, salts, magnesium and other minerals for reuse from coal mine wastewater, effectively ‘closing-the-loop’ on industrial wastewater from coal mining. On 8 October, press, government officials, and industrial and environmental experts visited the Bolesław Śmiały coal mine to see the ZERO BRINE technology making this happen, operated by the Silesian University of Technology (SUT).

"Saline mine waters cause serious problems for the rivers in the Upper Silesian Coal Basin, Poland. Desalination of mine waters could be a solution"    – Grzegorz Gzyl, Central Mining Institute.

The current technology standard used at Poland’s only industrial-scale desalination plant serves as the benchmark for the ZERO BRINE solution . This technology is energy-intensive with limited results in salt recovery due to the inability to recover additional elements present in the feed stream.

The proposed ZERO BRINE technology at Bolesław Śmiały aims to cut energy consumption in half while testing a combination of nanofiltration, reverse osmosis, and electrodialysis for the recovery and reuse of all elements in the feed water, including demineralized water, salt, magnesium hydroxide – commonly used in refractory or heat-resistant materials – and a calcium-rich solution that can be used as a deicing liquid. The remaining saline concentrate can be either sold or used for salt crystallization.

In operation since July 2019, the pilot plant can treat 400 liters of wastewater per hour and is showing promising results that could signal interest for the local industry with 18 active hard coal mines in operation around Poland. The business opportunities of ZERO BRINE are replicable to other industries worldwide. Because of how similar in composition coal mine wastewaters are to seawater, the proposed technology could also be applied in the desalination industry.

Circular processes in industry are essential to developing a sustainable, low carbon, resource-efficient, and competitive economy in the EU. Recovering all resources from wastewater enhances preserving resources and security of supply. Magnesium is listed by the European Union (EU) as one of 27 critical raw materials, in which the EU is currently 100% import-reliant, with China accounting for 94% of all magnesium supplied to Europe.

"The potential for replication and uptake of environmental benefits and energy-cost savings is immense in a broad range of industries. Due to the similar composition of coal mine and seawater, the proposed technology can be applied for desalination – a sector that will become increasingly important due to increasing water stress" - Professor Marian Turek, Silesian University of Technology.

The ZERO BRINE project aims to facilitate the implementation of the EU Circular Economy Package and the Sustainable Process Industry through Resource and Energy Efficiency (SPIRE) Roadmap in various process industries by developing necessary concepts, technological solutions and business models to redesign the value and supply chains of minerals and water while dealing with present organic compounds in a way that allows their subsequent recovery.

Three additional large-scale pilot plants have been developed in other process industries including a demineralized water plant in the Netherlands, a silica plant in Spain, and a textile factory in Turkey, providing the potential for immediate replication and uptake of the project results after its successful completion. In this way, ZERO BRINE encourages industrial circularity for a new generation of innovative, resource-efficient European businesses.