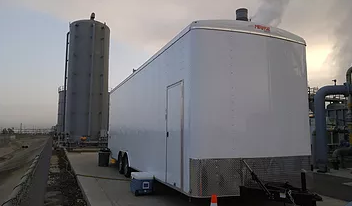 Distillate with high purity was produced from the SSI Core: specific conductance was 2.9 microS/cm (corresponding to a calculated TDS of 1.9 ppm); and all analyzed metals were below detection limits. An independent benchmark conducted for SSI and SCE concluded that the operating cost for a commercially deployed SSI Core + CIP water treatment system would be less than ½ the OpEx of SCE’s current system for treating their cooling tower blowdown water.

Currently, SCE treats cooling tower blowdown with a high efficiency reverse osmosis (HERO) system which requires four pretreatment systems, including a precipitator/clarifier, filtration system, weak acid cation (WAC) softener and a decarbonator, and pretreatment chemicals which are added prior to each pretreatment system.

Laura Demmons, SSI Chairman and CEO, stated that “SCE has again demonstrated leadership by pushing to see what is possible in reducing costs and complexity, reducing chemical use, improving operational efficiencies and improving clean water recovery. We are very fortunate to have had SCE’s support for this pilot test!”

SSI will conduct additional pilot tests for other water treatment applications before the end of
2018.