Seafood Processing Water as a Valuable Source of Protein 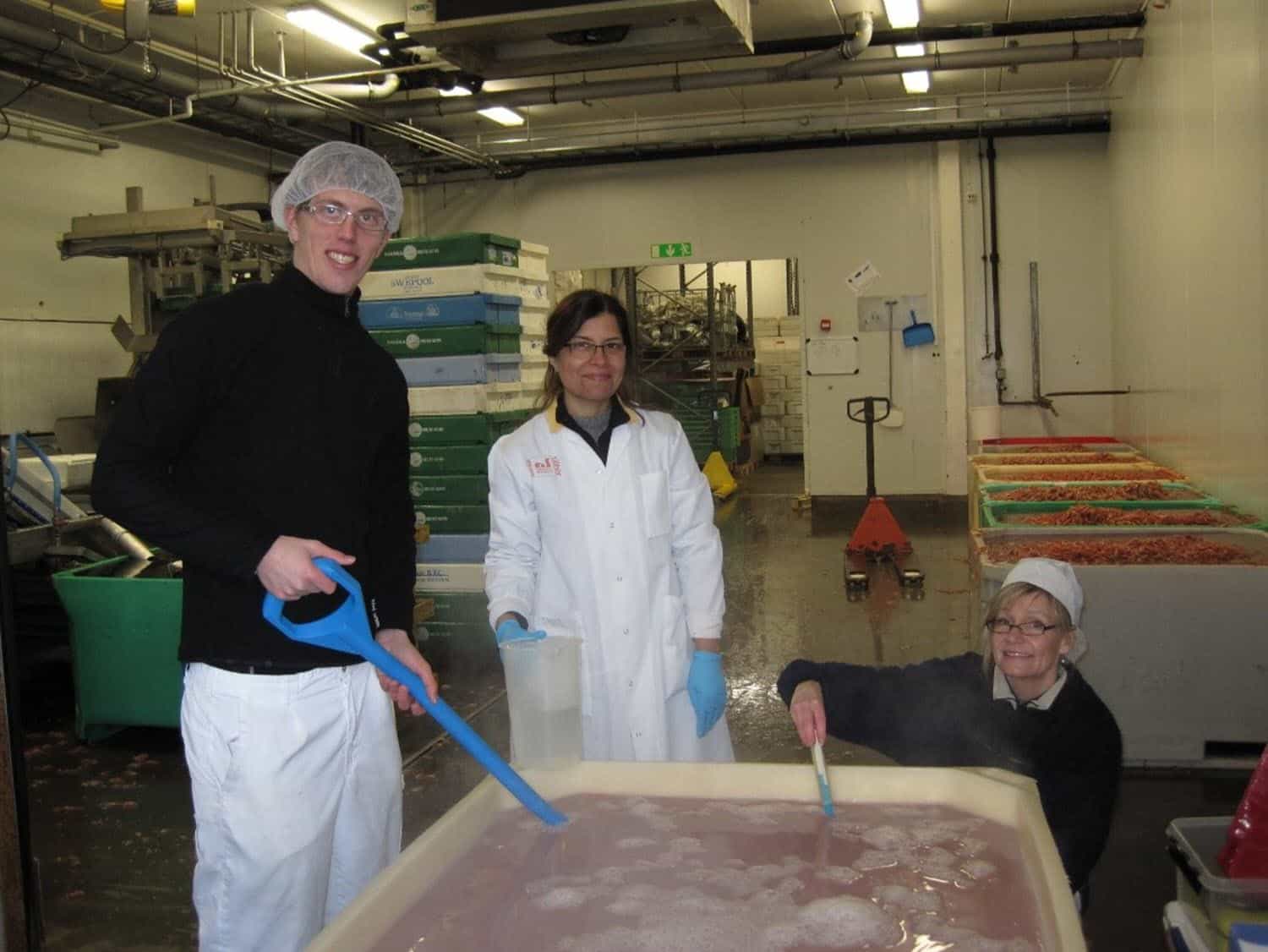 Process waters from the seafood industry contain valuable nutrients, that could be used in food or aquaculture feed. But the process waters are treated as waste. Researchers now show the potential of recycling these nutrients back into the food chain. 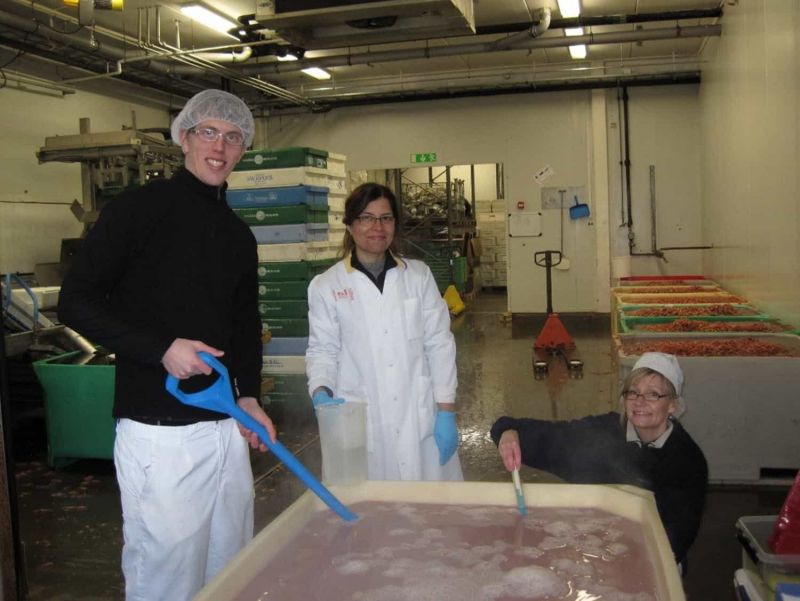 During preparation of herring, shrimps and mussels, large amounts of process water are continuously pumped out as waste by the seafood industry. The water is used when boiling shrimps or mussels, or when filleting, salting and marinating herring, for example. Approximately 7000-8000 liters of water is used to prepare a ton of marinated herring. A stunning 50,000 liters of water is needed per ton of peeled shrimps, or per three tons of raw shrimp.

But these side stream waters contain proteins, peptides, fats and micronutrients, which could be recycled and used, for example by the food industry, as an ingredient in feed or for growing microalgae. In fact, the leftover boiled water from shrimp preparation is basically a ready-made stock.

Nutrients could be recycled

The Nordic project NoVAqua, coordinated by Professor Ingrid Undeland of the Department of Biology and Biological Engineering at Chalmers University of Technology, has now shown the potential of extracting these important nutrients from the process waters.

”It’s very important to help the industry understand that the side streams don’t need to be wasted. Instead, they should be treated as really exciting raw material,” she says.

“The backbone of our project is a circular approach. In the past, we had a more holistic view on handling of food raw materials, but today so much is lost in side streams. Furthermore, we are in the middle of a protein shift, and there’s a huge demand in society for alternative protein sources.”

The research project started in 2015 with the aim to recover nutrients from seafood process waters and create innovative uses for them. A similar approach is already successfully implemented in the dairy industry, where the residual liquid from cheese making – whey – is used in sports nutrition, as well as in different food and feed products.

Much of the protein in lost

When the research team measured the composition of process waters, they found them to contain up to 7 percent protein and 2,5 percent fat. In process waters from shrimp, astaxanthin, a red pigment and antioxidant often used as a dietary supplement, was also present.

”Our calculations show that in a primary processing plant for herring, as much as 15 percent of the herring protein coming in to the industry leached out into the water and was treated as waste, thereby lost,” Ingrid Undeland explains.

Using a two-step process, the research team managed to recover up to 98 percent of the protein and 99 percent of the omega 3-rich fats. The process resulted in a semi-solid biomass and a nutrient-rich liquid. After dehydration, biomass from shrimp boiling water was shown to contain 66 percent protein and 25 percent fat. Two tests were made, together with the University of Gothenburg and Skretting ARC, using this new biomass as an ingredient in feed for salmon, and the results were encouraging.

The nutritious liquid was used for glazing frozen fish, thereby protecting it from going rancid. It turned out to be slightly more protective than water, which is currently used for such glazing. The fluid was also tested as a substance for microalgae-cultivation and was shown to enhance the growth of two types of algae. The algae biomasses can subsequently be used as sources of protein or pigment.

A need for investments

All in all, the research project pointed out several different ways to recycle the nutrients which are currently lost in the process waters. The next step is implementation in the seafood industry.

“A major challenges is to get the industry to manage the water side streams as food, beyond the stage when they are separated from the seafood product. Today, that is the point where the side streams start being handled as waste. This means there’s a need for new routines for cooling and hygiene,” says Ingrid Undeland.

In Sweden, the waste waters are purified to some extent before they go out of the factories. This means that many seafood producers already have the flotation technology needed in the second step of side stream recycling. But there are also investments to be made, says Bita Forghani Targhi, a post-doctoral researcher at the division of Food and Nutrition Science and colleague to Undeland.

“The main challenge would be cost-related issues,” she says.

The start of a new project

The work now continues within the new project AquaStream, funded by the European Maritime and Fisheries Fund. Bita Forghani Targhi points out that an important next step will include consulting with local businesses, interviewing them on generated side streams and verifying the current nutrient loss through a primary characterisation of process waters. She has a positive outlook on the future:

“I am quite positive on the fact that related industries, sooner or later, will be implementing these techniques. With ever increasing awareness on the value of recycling nutrients, this facilitates industrial processes to adopt feasible approaches towards a circular economy.”

FACTS ABOUT THE NOVAQUA PROJECT:

The projects full name is Extracting Novel Values from Aqueous Seafood Side Streams, or NoVAqua for short. The project was started in 2015 and closed in 2018, and was funded by Nordic Innovation. Partners involved alongside Chalmers included Räkor & Laxgrossisten AB, Fisk Idag AB, SWEMARC at the University of Gothenburg, DTU Foods, Bio-Aqua and Skretting ARC. Research on algae cultivation was done in collaboration with the researchers Eva Albers and Joshua Mayers at Industrial Biotechnology at Chalmers. Scandic Pelagic AB and Klädesholmen Seafood AB were also affiliated to the project, and play an important role in the new AquaStream project.