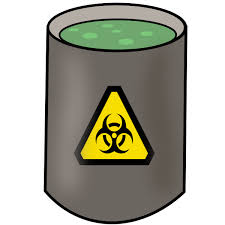 ﻿Industry is vital to society, providing us with everything from materials, cars and food to pharmaceuticals. However, it isn’t a totally rosy picture. Many industrial processes use or generate potentially toxic products. Pair this with the vast quantities of water required by many industrial plants and you potentially create a pollutant management headache. As our population continues to grow, and we rely ever more heavily on industry to keep the world healthy and functioning, the problem is only getting bigger. With an increasing amount of industrial wastewater being discharged, methods to identify toxicants are urgently needed for source control and quality management. A recent article examined the success of an extended suspect screening strategy to identify characteristic toxicants in the discharge of a chemical industrial park based on toxicity to  Daphnia magna . Fractions that were identified to be toxic were subjected to further analysis using chromatography and mass spectrometry-based methodologies to determine the presence or absence of 228 suspect chemicals.

We spoke to Dr Wei Shi, researcher at the State Key Laboratory of Pollution Control and Resource Reuse, School of the Environment, Nanjing University, China and last author of the study, and Dr Katherine C. Hyland, Global Technical Marketing – Food and Environmental, SCIEX, about their much-needed work.

Q: What are the most significant sources of toxicants in wastewater and why are they a problem?

A:  Organic compounds from industrial and commercial processing are the most substantial sources of toxicants in wastewater. The discharge from such processes can often include a variety of products, by-products and raw materials, such as pesticides, dyes, phenols, halogenated organic pollutants and polycyclic aromatic hydrocarbons (PAHs). Apart from the abovementioned organic compounds, other highly toxic pollutants found in wastewater are products from human use, including medicines like antibiotics.

All these toxicants are a problem because of the harm they cause to aquatic organisms, as well as the potential threat they pose to human and animal health. Compounds such as antibiotics can affect the natural “friendly” bacteria in humans and have a negative effect on their health. Many toxicants, such as some pesticides, can also persist in organisms as they are not easily metabolized or excreted once absorbed. This means that apart from direct ingestion of contaminated drinking water, animals and humans can be exposed to these toxicants through the food chain.

Q: Which toxicants are most challenging to detect and why?

A:  Wastewater is a highly complex matrix, and even simplifying it through pre-fractionation leaves us with a lot of compounds to detect and identify in matrices that contain many other analytical interferences.

Perhaps the most challenging consideration is the presence of potential transformation products or metabolites, which may well account for a substantial proportion of toxicity in processed, i.e., “cleaned up,” wastewater (effluent). Our study found that even with our suspect screening strategy, approximately 50% of the total toxicity was explained, meaning that the other 50% of the toxicity came from unidentified compounds. Of the 228 suspected toxicants that we were able to detect and identify (in four toxic fractions), there were six toxicants that required all four levels of mass spectrometric screening and a final level of chromatographic characterisation (using our in-house Quantitative Structure-Retention Relationship [QSRR] Model) to confirm: imazalil, prometryn, propiconazole, tebuconazole buprofezin and diazinon.

Q: Could you tell us a bit more about what an extended suspect screening strategy entails and how it differs from other strategies used to detect toxicants in wastewater?

o   To reduce the complexity of the organic contaminants in wastewater, the extracts were fractionated using preparative chromatography into 26 fractions. Water content was then removed from the fractions (by extracting three times with dichloromethane)

o   Each sample fraction of the non-organic component and organic fractions were tested for toxicity, to identify which samples and fractions contained toxic compounds

§  Isotope peaks had to occur as expected (based on known characteristics)

In our study, after sample preparation, chemical analysis was performed using high performance liquid chromatography (HPLC) on a standard HPLC system followed by mass spectrometry on an advanced quadrupole time-of-flight instrument. The chemical analysis revealed that five of the fractions were toxic to the Daphnia. Of these five fractions, four of them accounted for 90% of the total toxicity of the sample. These four fractions contained 28 suspected toxicants. The MS data from the four fractions was then screened using the filtering strategies to reduce false positives and confirm identification of the toxicants. Of the 28 toxicants initially identified, only 13 suspects remained after the filtering. Of these 13, comparison with the QSRR model revealed that only six suspects could be identified with relative certainty. These six identified toxicants were the herbicides, imazalil, prometryn, and propiconazole, and the insecticides, tebuconazole, buprofezin, and diazinon.

Q: Were there any findings from the study that surprised you?

A:  Although the wastewater treatment did reduce the levels of many toxic chemicals, it was disturbing to see that there were still several toxic chemicals that were not sufficiently removed from the wastewater by the processing. This may be due to the poor treatment efficiency and specific steps in the treatment process, such as unintended accumulation in active sludge. Imazalil, prometryn, tebuconazole, and propiconazole in particular were four of the pollutants that had high concentrations and poor treatment efficiencies, and as such, need better management.

Q: Based on these results, how would you like to see industrial wastewater management change in the future and what barriers might there be preventing this?

A:  Our study revealed that there is still much room for improvement in the management of key toxicants in industrial wastewater. The organic component, especially certain hydrophobic compounds, contributed most to the toxicity we detected. Six pollutants: imazalil, prometryn, propiconazole, tebuconazole, buprofezin and diazinon, which we identified with the extended suspect screening strategy, explained approximately 50% of the toxicity and should be considered as key toxicants.

The application of the extended suspect screening strategy, including the in-house QSRR model, translated into more efficient identification of toxicants – accounting for more causes of toxicity by a factor of about 2.5. That is, this strategy allowed us to explain 48.79% of the total toxicity of the processed wastewater, which is about 2.5 times the proportion explained by the target quantitation method. Moreover, the extended strategy was also able to save over 90% of the labour required compared with the non-target screening method. Therefore, we would anticipate that the extended suspect screening strategy will be applied and become relatively widely adopted for the management and source control of pollutants in wastewater processing.