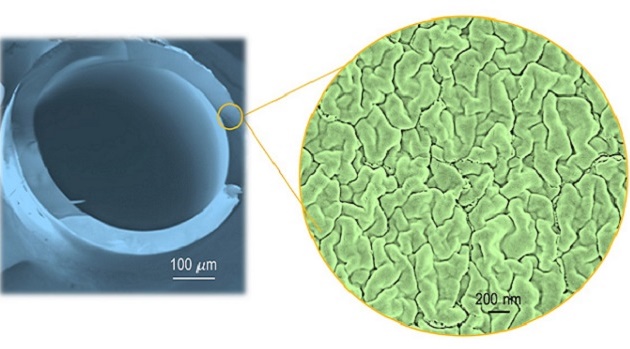 Selectively permeable membranes made from renewable plant-based materials could significantly improve the environmental credentials of the chemical industry. A KAUST team has tested the viability of cellulose membranes to show they can effectively clean wastewater.

Cleaning up with cellulose (Illustration by KAUST)

Using polymer membranes to separate mixtures is common in desalination, where seawater passed through membranes becomes potable because the membrane blocks the salt. Similar membranes are being adopted by the chemical industry as a green method for purifying products or cleaning up waste. However, the membranes are typically made by dissolving polymers in toxic, volatile organic solvents.

Replacing these solvents is a key aim of KAUST Professor Suzana Nunes. A potential replacement examined by Nunes and her team are nonvolatile solvents called ionic liquids, which can have a significantly less environmental impact than organic solvents. They can also dissolve membrane starting materials that are difficult to dissolve in organic solvents, such as cellulose.

“Cellulose is an abundant natural polymer which can be sourced from plants and bacteria,” says DooLi Kim, a former Ph.D. student from Nunes’s team, now working on a postdoc at the University of Twente in the Netherlands. The benefits of cellulose, including its sustainability and very strong yet chemically tunable structure, make it a very promising green membrane material.

In their latest study, Nunes tested the viability of cellulose membranes, cast from ionic liquids, to clean oily wastewater. “Oily wastewater is one of the biggest by-products of chemical, petrochemical and food industries,” says Sara Livazovic, also a former Ph.D. student from Nunes’ team, who joined Dow Chemical after graduating. “In regions such as Saudi Arabia, where the oil and gas industries are dominant, maximum oil removal from oil-in-water emulsions is an attractive concept.”

“The cellulose-based membrane had incredible antibiofouling performance,” Kim adds. Thanks to its hydrophilic surface, fewer oil deposits stuck to the membrane, and any that did adhere were easily washed out.