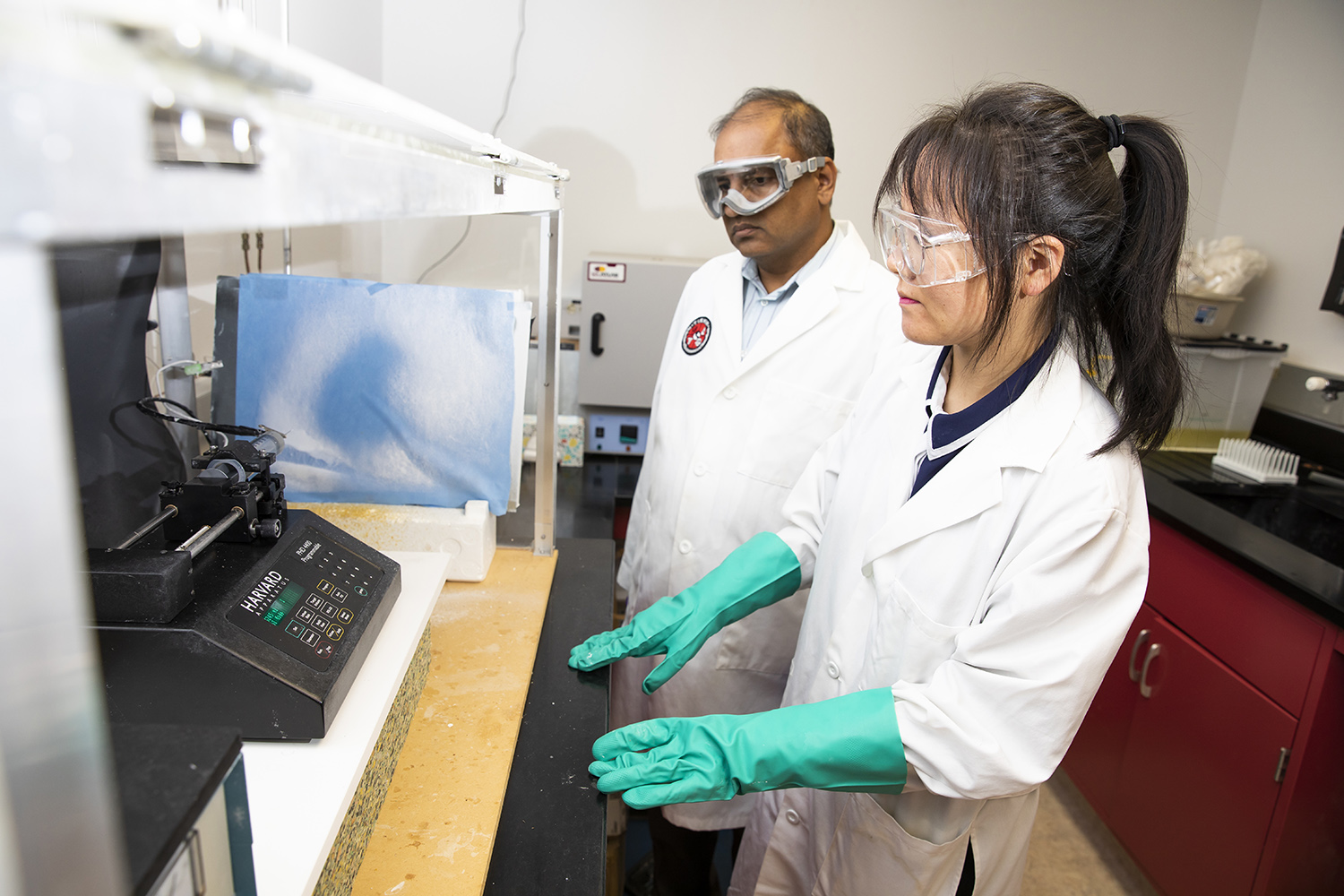 From health care to fracking and beyond, the ability to clean wastewater is vital in many fields. A team of Texas Tech University researchers working in advanced textiles has found a new way to remove toxic dye pollutants from wastewater, and their approach is safer, cheaper and easier than traditional methods. Their results are described in the upcoming cover article of the online journal Particle & Particle Systems Characterization.

When fabrics are dyed, one of the final stages is the washing process, which helps to both set the dye in the fabric and remove any excess dye. The problem, however, is that after the dyeing process, the water is contaminated with leftover synthetic dyes and pigments – up to 200,000 tons each year, by some estimates. Most of the dyes persist in the environment because of the inefficient, non-environmentally friendly conventional wastewater treatment processes and the fact that the dyes are designed to hold up to light, temperature, and detergents – the very things that might be used to clean them.

Previously, the process of decaying the dye has used predominantly ultraviolet (UV) rays. In collaboration with researchers in the departments of chemical engineering and mechanical engineering, Seshadri Ramkumar , a professor in the Texas Tech Department of Environmental Toxicology, and doctoral candidate Lihua Lou have found a way to decay the dye by filtering the water through special nanofiber webs and exposing it to visible light – a process called "photodegradation."

"It is green, renewable and environmentally friendly," Ramkumar said. "Using visible light for photodegradation is not harmful, and it's cost-effective and easy to operate. It makes the color removal in the industry economical."

Ramkumar's lab, the Nonwovens and Advanced Materials Laboratory, specializes in technical textiles. For this study, Lou added nanoparticles into a polymer solution, which was then electrospun into nanofibers. When the composite nanoparticle/nanofiber webs were immersed in water containing a reddish dye called Rhodamine B (RhB), a chemical reaction occurred.

Researchers found that 80% of RhB was degraded within six hours, and the remaining 20% degraded slowly, completely disappearing after 49 days.

"The research focused on toxic dye removal because it is a persistent challenge for the textile industry," Ramkumar noted.

Removing the color compounds is one of the most difficult tasks confronted by wastewater treatment plants because the dyes and pigments do not easily biodegrade. It's also one of the most important tasks because of the threat these dyes can pose to the human ecosystem.

"Some dyes are highly mutagenic and toxic," Lou explained. "RhB is a highly water‐soluble chemical compound and widely used colorant in textiles. However, the wastewater with RhB may cause irritation to the skin, eyes and respiratory tracts of human beings and animals. Moreover, several health issues, such as neurotoxicity, carcinogenicity, reproductive toxicity and developmental toxicity, arise due to RhB wastewater."

Based upon their success with RhB, the team's next step is to try the same method with other types of synthetic and natural dyes, including methyl orange, methylene blue and reactive blue 19.

In addition to the nanoparticle/nanofiber web's success in removing the dye using visible light is its ability to do so without much secondary contamination.

"Our research is multidisciplinary and addresses an important problem for the global textile sector," Ramkumar said. "After finishing the photodegradation process, the composite can be easily removed from water without leaving much harmful residue."

Support for this research was provided by the Texas Tech Graduate School and the American Association of Textile Chemists and Colorists.

About the Nonwovens and Advanced Materials Laboratory

Ramkumar's laboratory has been carrying out research with nanofibers and advanced fibrous materials for two decades. Early work included the creation of FiberTect, a nonwoven decontamination wipe capable of cleaning highly toxic chemical agents. More recent work has involved the development of environmentally friendly oil absorbent wipes and the incorporation of natural biocides in nanofibers to develop materials that can be used in wound healing.